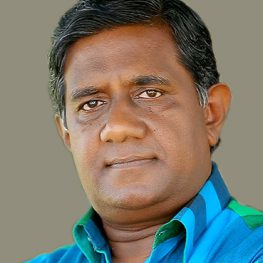 Faculty of Music
Department of Ethnomusicology

He joined the Institute of Aesthetic Studies in 1992 as an External Instructor. He was promoted to Instructor in 1998, Lecturer in 2003 and Senior Lecturer in 2010. He served as an External Lecturer in the Postgraduate Diploma Course in the Department of Sinhala and Mass Communication, University of Sri Jayewardenepura from 2000, 2010, 2012, and 2013. He is currently the Dean of the Faculty of Music at the University of the Visual and Performing Arts.
He entered the University to teach North Indian classical music and changed his field of study. Various creative works were carried out using the source found in various researches on Sri Lankan folk singing and folk culture. He was awarded the Bunka Award by the Japan Sri Lanka Friendship Cultural Fund in 2014 for his contribution to the international popularization of Sri Lankan folk culture.

In 2005, he formed the Matra Folk music team with the primary intention of performing in Sri Lankan folk culture. An experimental folk singing concert called ‘Matara’ was staged at the John de Silva Theater, Colombo in 2008, adapting Sri Lankan folk songs to the modern stage. Creative performances of Sri Lankan folk culture and folk songs were performed in Melbourne, Australia in 2014 and in the United Arab Emirates in 2017. Won Best Creative Folk Song Award and Best Song Award at the State Music Awards 2013 held by the Ministry of Culture. He was the recipient of the Vishwabhinandana Award 2016 presented by the Western Provincial Council for his lectures and workshops on folk culture of Sri Lanka and his performances in various media outlets.

He was the first lecturer in Sri Lankan Ethnomusicology and is currently the Dean of the Faculty of Music at the University of the Visual and Performing Arts.