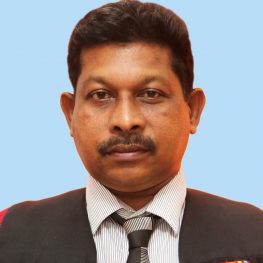 Faculty of Music
Department of Musicology

After completing secondary school education at seewali central college Rathnapura, I devoted my time to higher education. I joined and followed a degree program in music from the institute of aesthetic studies at the University of Kelaniya(1985-1991). I completed a bachelor of fine arts special degree in music from IAS Kelaniya university in 1991. after I joined the staff member as a temporary instructor in the institute of aesthetic studies. After that, I followed a post-graduate diploma in Sri jayawardanapura University. After I joined the permanent staff member as a lecturer (probationary) in the Faculty of music, University of visual and performing arts. My subject is north Indian music instrumental-Tabla. thereafter I went to India in 2003 And I got my Master of Music degree from Banaras Hindu University Varanasi India in 2005. After I returned I became a senior lecturer at the university of visual and performing arts. Then I became Head of the department in the Department of musicology and I developed the curriculum and infrastructure of the musicology department. and I gave my service to that department for 8 years as Head of the department. Then I became the Dean of Faculty of music from 2017-2020.