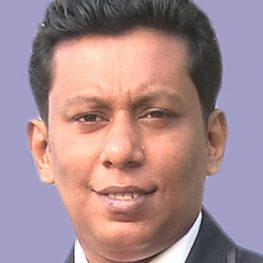 Mr. Ranga Perera compleated his first degree from University of Kelaniya Sri Lanka in 2007 with First Class Honors. Subsequently He received a M.A. degree with First Class in Tabla from Indira Kala Sangeeth University Khairagarh, India.He was recruited as Lecturer (Probationary) post for the Department of North Indian Music in 2012 and promoted to the post of Senior Lecturer post in 2017. Mr. Ranga also qulified with Vadya Nipun certificate with first class in Tabla from Bhatkande Sangeeth Vidyapith Lucknow, India. Further He compleated his M.Phi. from University of the Visual & Performing Arts Colombo in 2015. Ranga Perera is an Tabla artist performed both in local and foriegn stages. He participated in many international conferences presenting his research works and he was invited as Plenary Speaker on 17th International Conference of Teaching, Education & Learnning London, U.K. in 2019.