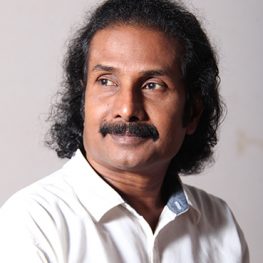 Faculty of Dance and Drama
Department of Drama, Oriental Ballet and Contemporary Dance

“Prasannajith Abeysuriya enters the art of drama while he is in his alma mater. As a student in Welmpitiya Vidyawardna Vidyalaya in 1975 the first sign of his career is seen with writing and directing the drama ‘Midiwatta’ for the inter school drama competition in Colombo district which was coordinated by the Lions club. He won the award for the best actor in this particular competition. His early abilities in the alma mater confirm that the art of drama has affected his life immensely. The influence of the area where he was grown up and the option of having the opportunity to watch dramas in the capital and the characteristics of his teachers in his early life have affected his early career. He enters the open stage a prompter with the drama ‘Gamane Ya’ of Sirithunga Perera in 1976. He has played parts in stage management and prompting in the dramas of Sirithunge Perera in between 1976-1980. He end his school life with the access to the career of drama.

By winning the award for the best actor for his own drama ‘Midiwatta’ Prasannajith proves that he has a great ability in acting and creates the opportunity for him to join the open stage with the drama ‘Parana Coat’ of Sirithunge Perera in 1980. It has to be reminded that Prasannajith was born and grown up in an area where so many great drama artists were among who contributed lot to the art of drama in Sri Lanka. He has played roles in Vesak drams in the area. However as it’s a well known fact that a young guy who has an affection towards the art of drama could only start conveying his abilities through the street drama in the beginning but not by the stage drama Prasannajith underwent the same. By joining Gamini Hathtotuwagama’s open Street Drama Group in 1980 and performing as an active member with passion in the group till 2002 paved the way for him to elaborate his abilities in acting and to realize the potential energy an artist could have. Dedicating his young life for street drama for over two decades mean a great empathy for the whole arena of drama.

It can be clearly mentioned that Prasannajith has obtained not only a theoretical knowledge but also practical acquaintance about the art of drama with immense courage in his early career. That foundation was made strong by joining a full time drama course which was held at State Institute of Theatre Arts in Ministry of Cultural Affairs in 1987 and Children’s and Youth Theater Organization conducted by Mrs. Somalatha Subasinghe. He had to resign from the executive job which he was engaged fulltime in the private garment industry in order to occupy full time in the drama field and to gain theoretical and practical knowledge of it. It’s a dedication made by him when compared to the modern generation who are always focused on studies for occupation. In the year 1993 he joins the University of Kelaniya and obtains a special degree for performing art and later Master degree for drama and theater from university of Sri Jayewardenepura. He is currently working as a senior lecturer in the University of The Visual Arts and Performing Art. His journey of creativity and education has led a great example for young artist in the modern era.

Prasannajith becomes a great ambassador and a mentor to the Sri Lankan drama and theatre field as well as for the upcoming performing artists, as he accomplished all areas of it, such like script writing, directing, acting, costume designing, lighting, stage designing and been honored by the general public.