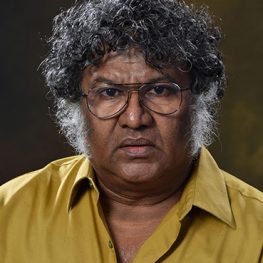 Faculty of Visual Arts
Department of History and Theory of Arts

Professor Chandraguptha Thenuwara (BFA/MFA/MPhil) was born in 1960, in Galle, Sri Lanka. He is the Professor of the department of History and Art Theory at the University of the Visual and Performing Arts and the director of Internal Quality Assurance Unit of the University of the Visual and Performing Arts,Colombo. In 1993, He founded the Vibhavi Academy of Fine Arts(VAFA), an artist-run Alternative art school. He studied painting at the Institute of Aesthetic Studies, University of Kelaniya (1978-1981) and Surikov State Art Institute, Moscow, Russia (1985-1992);MPhil at the Post Graduate Institute of Archeology (PGIAR),Kelaniya University(2006). Since 1978 he has exhibited widely in Sri Lanka and Abroad. His works are also included in the collections of the Queensland Art Gallery Australia, Fukuoka Asian Art Museum Japan, John Moore’s University Art Collection Liverpool and Fine Arts Museum of Udmurtia, Izhevsk, Russia. His public monuments include the Seeduwa monument to the Disappeared and Monument to Neelan Thiruchelvam at Kinsey Terrace Colombo.

Chandraguptha Thenuwara is a leading Sri Lankan Artist whose work focuses on issues surrounding the impact of war in Sri Lanka. In response to overwhelming crisis Thenuwara has devised his own stylistic formulation, which he has called “”Barrelism””. Among his recent works there were drawing and painting series such as ‘This is not a White Van’, ‘This is not a White Flag’ and ‘Thorns’. His solo exhibitions Neo-Barrelism (2007), ‘Wall’ (2011), ‘Beautification’ (2013) and Monotony (2014), ‘Electric Chair for Sale’ (2015), changed gallery space completely. His recent exhibition was ‘Executive Demon’ (2018). He was a President of the Federation of University Teachers Association (FUTA) from 2014 January to January 2015. He is an active member of ‘Purawesi Balaya’ (Citizens’ Power) organization. Since December 2015 to 2018 June He was the President of the Arts Council of Sri Lanka and since 2015 to 2020 The Director of the Center for Quality Assurance of the University of the Visual and Performing Arts. He lives and works in Colombo.

Artworks at Institutional and Private Collections: