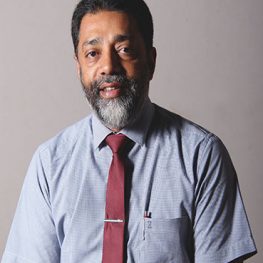 Faculty of Dance and Drama
Department of Drama, Oriental Ballet and Contemporary Dance

Saumya Liyanage has been working as an actor and a theatre scholar in Sri Lanka over two decades and has received best actor awards and many accolades at leading theatre and film festivals in the country. Saumya completed his Master of Creative Arts Degree at Flinders University, South Australia in 2003 and received his PhD from La Trobe University, Melbourne, Australia in 2014. He has published many papers and articles in national and international journals and has presented research papers at the International Federation for Theatre Research (IFTR) and Australasian Drama, Dance, and Performance Studies (ADSA) conferences. His recent book is titled ‘Meditations on Acting: Essays on Theory Practice and Performance’ published by DEV Publishing, Colombo. Saumya has received BUNKA award for his contribution to culture and arts from the Japanese Embassy in Sri Lanka.